- September 20, 2017
I have long wanted to depict a wild boar, as painting or print, as my computer desktop testifies, with a folder entitled ‘boar hogs ref’ that has sat there, bulky with digital visual reference of boars in many forms for a few months now. To be honest, I like the idea of hunting one too. Like game fishing, an honest way of earning your bacon. Boars, unlike many other game quarry however, are fearless. They would square up to you in defiance if they found you threatening them or if you had the cheek to be in their territory and I respect that. Visually, they also look great - the stuff of legend, dark, matted coarse hair, thick with mud and sweat and the male boar sports sharp, intimidating tusks. They are built like a bull, all forebody, full of muscle up front and brave as you can be. I’d like to do a relief print at a later stage, (the boar’s textured pelt is perfect for a grainy print) but for now, with an evening to spare, I thought a quick loose watercolour painting would do the job nicely. (Original for sale: £75.00): petergander@gmail.com (prints may be available at a later date). 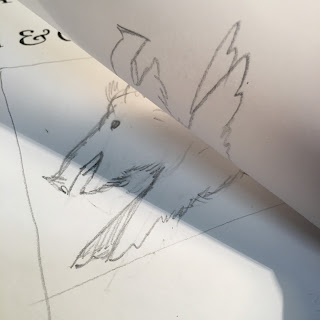 Tracing the old-fashioned and unbeaten way 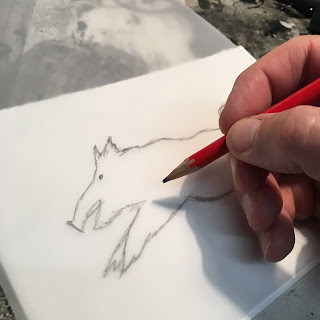 Tracing down onto Bockingford paper 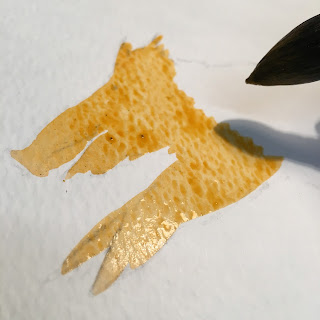 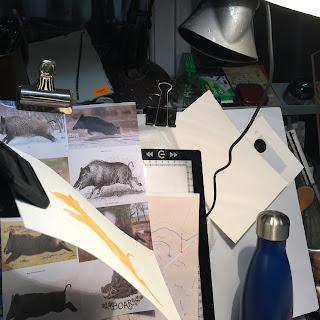 My roof-suspended hairdryer helps drying along in my messy studio

Popular posts from this blog 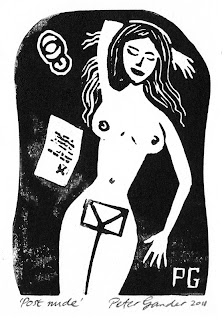 A local art gallery, The Horsebridge Community & Arts Centre in Whitstable, where I will be exhibiting in May, has recently opened a new gallery (Gallery 3) and the curator Sarah Banville has challenged artists to produce an original work of art on a postcard. The local post sorting office is in danger of closing and in a double-edged benefit, the exhibition of tiny (A6) originals will not only make for interesting viewing for the public, but also for the lucky postman delivering the postcards en route to The Horsebridge. I already had a pack of Winsor & Newton Cotman 300gsm postcards with a semi-rough surface, great for painting watercolours on but not ideal for printing on, as the pitted surface needs a hard pressing to push the ink into them. (Thin paper is usually the substrate of choice for most linoprinters). I had to set the roller printing press so firmly in fact, that the lino left an embossed effect on the card. In the print shown, you can see the patchy areas where …
Read more 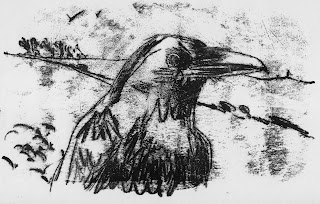 Another monoprint study. This is essentially a sketch for a two-colour linocut that I plan to cut later tonight.
Read more 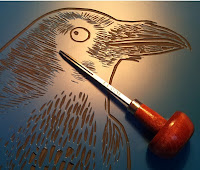 Continuing my corvid phase, today I used a lino-like material called Japanese Soft Cut vinyl that I bought online from Intaglio Printmaker.co.uk It’s floppier and shinier and softer than lino, though I think lino still has some way to go to be beaten. The vinyl I found much ‘stickier’ than lino, with the end of the cutting stroke often rebounding or not finishing in a clean manner. However, if you are not planning anything too fine in detail, it’s lovely stuff and very easy to carve.
Once my design is carved, I make a ‘lino rubbing’, placing a sheet of thin cartridge paper over the lino/vinyl to check that all is well with the image. Then I cut out the shape with a craft knife (easier to do than with lino) and stick it onto a board to keep it stable for printing and to register it properly. Rather than use a solo black for the crow, which after all, have irridescent feathers, I opted to mix a blue and black gradation on the roller. Then it’s just a case of testing the roller pressure a…
Read more